In the sidelines of the ISO General Assembly in Berlin, also called the ISO week, the CEO of SIS, Mr. Thomas Idermark, co-hosted an event together with the Swedish Embassy and Business Sweden.

The participants, who represented standardisation bodies in developing countries, had at least one thing in common ─ their strong wish to strengthen their organisations. According to Mr. Hermogene Nsengimana, Secretary General of the African Organization for Standardization (ARSO), many of the current standardisation initiatives are powered by the developing countries' needs, which is a positive development.

Deputy Ambassador of the Swedish Embassy in Germany, Mr. Johan Frisell, emphasized the importance of standards for a well-functioning world trade and for the implementation of the 2030 Agenda and the Sustainable Development Goals.

In line with this, Swedish Trade Commissioner to Germany, Ms. Anna Liberg showed examples of Swedish companies having achieved greater financial success after focusing on sustainable production methods. Ms. Liberg also promoted partnering with SIS as an opportunity to promote Swedish trade and investment even further.

The development projects of SIS were presented by Ms. Carina Svensson, who has long-standing experience in the area. She in turn highlighted how important it is to raise the knowledge and awareness of the many ways in which standards can be put to use, giving the example of a Green Banking Project. 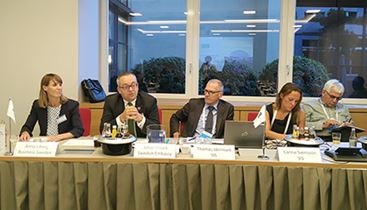 Do you want to know more?
SIS organization